Editors Note:  Veronica Iglesias will be leading a Sacred Tour of Mexico for Spring Equinox 2017. 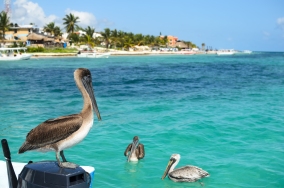 Ix´Cheel or Ixcheel, the feminine energy in the Mayan Cosmos.

Cozumel was a place of worship for the Divinity Ix’Cheel or Ixchel.  She is related to the moon, fertility, rains, medicine, divination and childbirth.  Grand Mother Ix’Chel is a beautiful goddess who can teach us to honor our cycles, our darkness, our shadow and our great light!

Ix’Cheel represents the feminine principle of the cosmos and together with her partner Itzamna, are the creative energy of life on Earth. She is the guide of the wise women, of those who heal, of those who read the destiny of the newborns; Of those who weave and narrate cosmic stories in their fabrics.  Ix’Cheel is the Mayan grandmother, guardian of the female mysteries, guardian of the pregnant women, the newborn children, the moon, the medicine, the medicinal plants, the water that cleans and purifies. Ix’Cheel is the feminine divine energy that creates life and also destroys it, specially when she represents the energy of the water. She was asked for rainwater in times of drought and she was also asked to stop the force of water that destroyed houses and crops.

She is the guardian of sacred jade, of life, of the heart of her priestesses who honored her in her two sanctuaries, in Isla Mujeres and Cozumel. There is no doubt that Ixchel and Cozumel have many secrets to unveil.  Recently women from various parts of the world have restarted the pilgrimages to consult the energy of the oracle related to health, fertility, initiation into the medicine, pregnancy and finally, with the weaving of life.

Photo of Ixchel banner by Lydia Ruyle in Goddesses of the Americas, available at Goddess Ink or Amazon.

Cozumel was a sacred site of great magnitude, not only because it was the sanctuary of Ixchel but also because its architecture turned it into an earthly reflection of the cosmos, a great Tollan (a paradisiacal  mythical site and center of pilgrimages) in the middle of the sea.  Cozumel was a strategic site in Mesoamerica, its importance is not in monumental buildings but in its place of the cosmos, it was considered another Tollan and was also an oracular sanctuary, where thousands of people of all The Mayan area came periodically, especially women.

Cozumel is the third island with the largest territory in Mexico, located southeast of the Yucatan peninsula. It is known mainly for being a tourist site to which cruise ships arrive daily across the Caribbean, as well as all the tourists who come to enjoy the crystalline beaches of the Mexican Caribbean.  Historically, it has been inhabited since preclassic times (1500 BC to 300 D.C), until the arrival of the Spaniards in 1518.

Most of these buildings and those existing in Cozumel were built in the Postclassic period (900-1518). Many of the new settlers are thought to have been Mayan-Chontal or Putun, who arrived after the fall of Chichen Itza (1200 BC).

The pre-Hispanic architecture of the island shows great alignments with the solstices and phases of the moon, particularly the full moon, whose cosmic force was also linked to the rains and procreative and propitiating energy.  With all these constructions aligned with the earth and moon movements, the spaces in Cozumel are also related to the ritual calendar and to the consecration of the spaces, common practice in the Mayan culture and whose origins go back to the Olmec culture.

Taking into account all the astronomical and architectural marks in the buildings of Cozumel and its relation with the Moon and the Sun, the mystical-cosmogonic importance of the relevance of the Night Sun is remembered, that can be considered like the Sun that during the night travels to the underworld, but also like the moon that shines in the sky at night.  It also highlights the relevance of the four cardinal points and their relationship to the creation and sustainability of the world and the creation of time.

Additionally, for the Maya, the divinity of the Moon was also associated with water, caves and cenotes. The Maya believed that during their absence in the sky, the Moon would retreat and reside in a watery cave or cenote. There are still two expressions in the Yucatec Maya that denote the Moon’s invisibility period: benel u tu che’n, “Moonrise to your cave” or binan u tu che’n “Moon. (Iwaniszewski, Stanislaw, “El tiempo y la Luna en la cultura maya: el caso de Cozumel”, in: UNESCO, El papel de la arqueastronomia en el mundo maya: el caso de la isla de Cozumel, Mexico: UNESCO, 1916. p. 49).

The Goddess Ixchel, Mayan Grandmother is guardian of Cozumel and Isla Mujeres in Mexico.  We hope you join us on the Goddess Ink Sacred Tour for a wonderful adventure that we will have during Spring Equinox in 2017, visiting the two Sanctuaries of Ixchel, Isla Mujeres and Cozumel, where you can experience the magic and wonders of the place.

Maria Veronica Iglesias Ramos was born in Mexico City, Mexico. She has a Bachelor´s degree in Library Sciences and a Master´s Degree in Mesoamerican Studies from the National Autonomous University of Mexico (La Universidad Nacional Autonoma de Mexico). She grew up in a family that always honors the Earth, the plants and all the living beings.

She was initiated as a sahumadora (bearer of the Sacred Sahumerio) when she was 8 years old. She studied about medicinal plants, crystal therapy and healing with gems. She also was initiated in the sacred knowledge of Mesoamerican shamanism and she became a Portadora de la Palabra, bearer of the Sacred Word. She is also a Priestess of Ix´Cheel, the Mayan Goddess of Medicine. She is currently researching gem stones and their therapeutic use, Pre-Hispanic medicine,  Feminine Shamanism in Mesoamerica, Feminine rites of passage and Goddesses from Mesoamerica.  She can be found at https://www.facebook.com/Papalotl,  and at http://papalotl.net/.

For more information and to follow Goddess Ink Blog visit www.goddess-ink.com  or visit us on Facebook at https://www.facebook.com/goddessinkbooks/.  Also, please sign up for the Goddess Ink Newsletter for a monthly dose of inspiration.